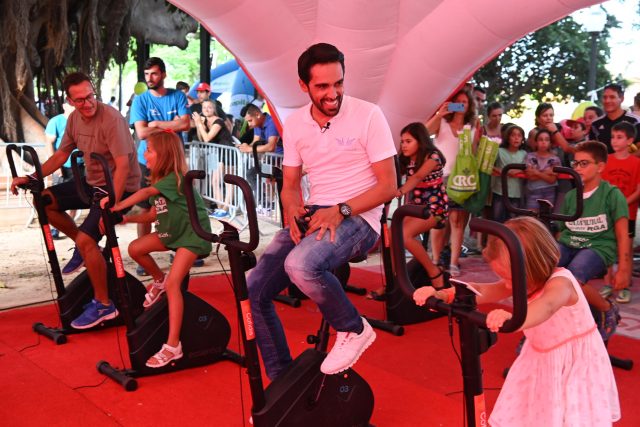 Alberto Contador returns to the Vuelta pack with Cofidis

The champion of the Tour, the Giro and the Vuelta gets on the bike of the “Pedalón Solidario” of Cofidis to travel, together with a group of fans, kilometres that are transformed into euros to promote cycling among people with disabilities. Shortly before, the exciclista from Pinto inaugurates in Alicante the third stage of the Vuelta Junior Cofidis and support, both at the start and at the finish line, the 150 participating children, who enjoy his company and advice. Alberto Contador has participated in the afternoon of this Monday in Alicante in the “Pedalón solidario” of Cofidis installed in the Park Vuelta. The exciclist has encouraged Alicante to pedal in the static bicycles that transform the miles traveled in euros to allocate to social projects linked to cycling adapted from the Foundation created by the exciclist.

Contador has climbed on the bicycle of the “Pedalón solidario” together with a group of fans from Alicante, who have also been able to share a few minutes with him. All of them have pedaled together and have covered their most beneficial kilometres. “It is a very gratifying experience to encourage and accompany so many people to give the maximum in each pedal and thus get the maximum number of kilometers that will become euros solidarity,” said Contador, who also said that “the harmony with Cofidis is total because we both understand that we must return to society part of what this gives us.

The “Pedalón solidario” is part of the project “Cofidis, Pedaleando Contigo”, a pioneering initiative that the financial institution promoted in 2018 by the hand of the Spanish Paralympic Committee and the Royal Spanish Cycling Federation. The project, with a clear social vocation, was defined with a double objective. Firstly, to promote the social integration of people with disabilities through cycling, for which the “Pedalón solidario” (Solidarity Pedal) was set in motion. And, secondly, to support the development of Spanish Paralympic cycling through the creation of the Paralympic Promises Cofidis Team.

A few hours earlier, children were the protagonists Before pedalling for social inclusion projects, Alberto Contador has inaugurated the third of the ten stages of the Vuelta Junior Cofidis, the program promoted by the financial institution, which this year reaches its ninth edition and aims to promote road safety education, bicycle use and healthy habits among Spanish schoolchildren.

The exciclist has given the start of a stage in which 150 schoolchildren belonging to several schools in the city have participated. Everyone was able to share some time with him and listen to the advice of the champion of the Tour, the Giro and the Vuelta. In addition to being present at the start, Contador also gave prizes to the children at the end, who covered the last kilometre of the stage just a few hours before the elders arrived and were able to compete in a healthy way and live the atmosphere of professional cycling from within. “The children are the future and I am very excited to see them so excited before participating in the Vuelta Junior Cofidis”, said the Spaniard, who also wanted to highlight that “seeing their happy faces after running the last kilometre is priceless”.

In addition to Torrevieja, Calpe and Alicante, where the stages have already been held, the Vuelta Junior Cofidis comes this year to El Puig (morning, August 27), Igualada (Saturday, August 31), Bilbao (Thursday, September 5), Oviedo (Saturday, September 7), Guadalajara (Wednesday, September 11), Toledo (Friday, September 13) and Madrid (Sunday, September 15). These ten stages are the culmination of the Cycling Classrooms, theoretical and practical classes on road safety education and the use of the bicycle developed in dozens of schools in Spain during the months prior to the celebration of the Vuelta.