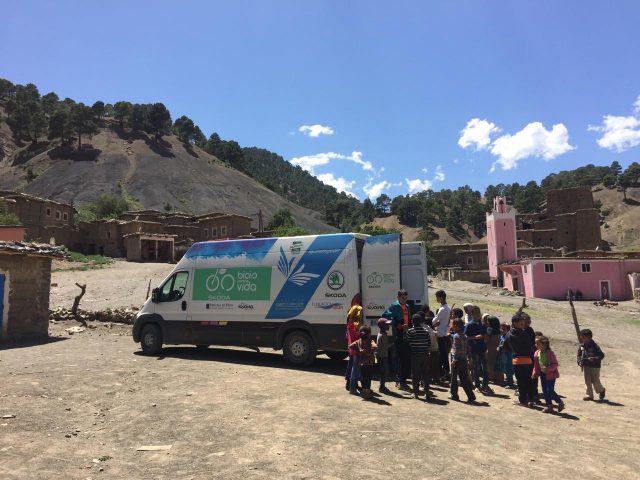 The small town of Amarghout has been the recipient of the latest donation of bicycles from the project Bicis para la Vida by ŠKODA, the solidarity initiative of the Alberto Contador Foundation supported by the Czech automobile firm of the Volkswagen Group and Seur Foundation. A total of twenty bicycles were distributed last week among the most needy children of this village in the Tessaout valley, in the Moroccan High Atlas; a delivery that, as on previous occasions, unleashed madness among the youth of this rough area of the province of Azilal. Hafid El Rhadiouini, the interlocutor of the Alberto Contador Foundation on Moroccan soil, fundamental in the planning of deliveries, had previously coordinated with the rais de Amarghout who should be the recipients of donations. “It’s not about getting to our destination, opening the doors, taking out the bicycles and leaving them there at all,” says Paco Romero, who is in charge of the project within the Foundation. “Hafid draws up a list in the field, with the collaboration of local authorities. The delivery is made with names and surnames”. In addition, it is tried that it is also equal. “It is a very simple gesture that also promotes and educates the youngest in the area on gender equality”.

“All the deliveries have something; but in the end they agree that at the same time that you help to cover a need, they also make you participate of a time of their lives, they open the doors of their life to you”, thanks Susana Pato, manager of the Hotel Princesa de Éboli de Pinto. “These deliveries, such has been my experience, generate a lot of expectation, an expectation that increases as the date approaches. Two days earlier they’re already calling to find out when you’re arriving. It’s a nice anxiety. On the way, before you reach your destination, you are already meeting children who are waiting for you. For them it’s still a novelty, as if somehow people were coming from another planet. They come, they are with you, they want to take a picture. It’s not that they want to receive the bikes or the material, no; they want to be there, they want to accompany you, they want to play, they want to spend time with you. And they try to communicate in any way, with a mixture of signs and the little French they may know… As I usually say, they interact with the heart. It’s a natural interest, of great authenticity”.

On the other hand, the last solidarity expedition of Bicis para la Vida by ŠKODA has also been more complex than the previous ones. If in previous journeys the adverse weather of this mountainous area posed some logistical difficulties, on this occasion it was the state of the accesses to the village. The extreme narrowness of the road in some points, in a twisty route in a high mountain environment, as well as the state of the road surface, generated some uncertainties about the possibility that the van and its cargo could reach its destination. The work of Angel López, responsible for the logistics of the project, and his expertise at the wheel were fundamental to the success of the company. They are complex environments at the level of routes, with rudimentary or non-existent infrastructures. A puncture in a wheel, as long as all the necessary components for its repair are not available, can mean up to a day of waiting for a crane. Or even more so, since this journey took place in the middle of Ramadan. The temperatures on these days have been particularly high.

“This journey, moreover, although it was a two-day journey, needed good advance planning as it coincided with Ramadan. It was necessary to organize and foresee very well the whole issue of gasoline, water supply, food … From the Hotel Princesa de Eboli de Pinto we took care of a bit of this quartermaster,” explains Susana Pato. His presence on this trip in another vehicle with Mohammed El Rhadiouini, provided the necessary coverage to be able to face an on-site inspection of the terrain and the search for alternatives to be able to successfully arrange the delivery of all the material. During the same one lived some very comical moments that generated not few smiles, like that adult who went to put on his new shoes in the middle of all the jolgorio and ended up putting on two of the right foot. Or the girl who rode a bike and with the first kiss of the breeze drew on his face a wide and sincere smile. The hosts wanted to recognize the gestures with tea, sweets, bread and butter, among others. The expedition was grateful for the food, although they politely rejected it due to the celebration of Ramadan, as a sign of respect for their fasting. “The choice of the village is very important. First, there is a question of location, since the children who receive the bicycles have to use them to go to school. And if the village is close to the school or has transportation, priority will be given to a more remote one,” contextualizes Susana Pato. “After the election, it is very important that there is one donation per family and that the family reaches the same number of boys and girls.  It’s a shame, of course, because there are many more children, but it’s a way to reach as many families as possible. In addition, at a time when girls are already considered women, and it is very soon, at 12 or 13 years of age, their role changes and they can no longer appear so much in public, they cannot mix with men… We also made a small delivery of material, which cannot be photographed; a delivery that was made in a covered room”.

In this last trip of Bicis para la Vida by ŠKODA the vehicular character of the same, meeting point and generator of synergies came to light again thanks to which the experience also counted with the contributions of shoes of the brand John Smith, one of the technical sponsors of the teams of the Alberto Contador Foundation, or donations of material made by the Athletic Club of Pinto de fútbol or the Club Running Pinto de athletismo. “Dana Marketing Solidario helped us achieve these important contributions. The football team gave us some material that is great for them to continue organizing some small leagues that they make between the boys of the villages of the valley. The athletics club donated an entire drawer with T-shirts for girls and boys,” concludes Pato.