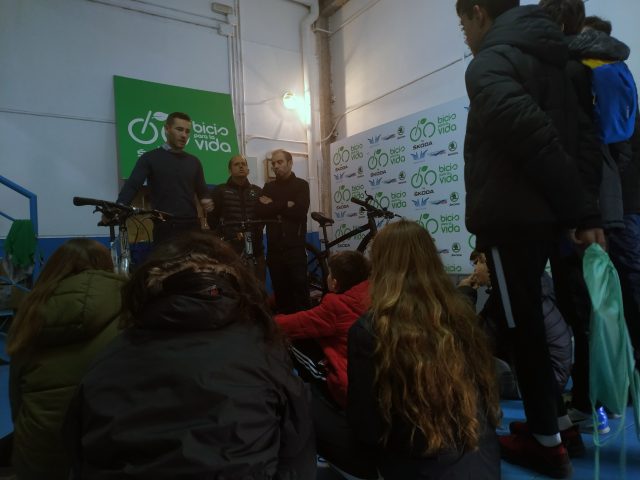 Clara, fictitious name, jokes with Sandra, idem, after having given the last adjustments to the bicycle that, together with her colleague David, also figurative name, they are manipulating between all to give him the last adjustment. “I don’t know if I’d dare touch that brake after you fix it,” smiles the first one in a joking tone. “I’ve made it perfect. “It’s going to change better than before,” says his partner.

The three, second-year students of the Secondary School of Madrid’s Colegio Sagrada Familia de Urgel, are part of the penultimate of the groups that, during three days, between Tuesday and Thursday of this final week of November, have come to the headquarters of the Bicis para la Vida by ŠKODA project to carry out the practical sessions of the educational project linked to the world of the bicycle that takes place in this school in Vallecas area, Madrid Divided by groups, the girls and boys of second of the ESO have received a practical class, given by the mechanics of the Alberto Contador Armando Ortego and Víctor Aguado Foundation. Both have subsequently supervised the evolution of the children, separated into small work teams, when they have had to fix and tune the brakes and change several bicycles, as well as regulate some of its components.

At the same time, another group of students had the opportunity to face a small bicycle start and finish in the Juan Carlos I Park in the Madrid town of Pinto in which they could try bicycles that have been developed by members of the AMP Pinto. Two of its members were also present in practical sessions where they had a deeper understanding of their work or the benefits that this fundamental collaboration provides in the development of Bicis para la Vida by ŠKODA.

These practical sessions have given continuity to the work begun weeks ago with talks given at the centre by Paco Romero, head of Marketing and Media Relations, Félix García Casas, manager of the Foundation’s teams, Mario Sánchez, Social Responsibility technician at the AMP, and César Correa and Gonzalo Gómez, members of the AMP and regular collaborators. “It’s been a lot of fun, it’s a much more bearable way of taking classes and we’ve learned a lot. What did I like the most? The internship was very good but the other day we got the documentary and to see where the bikes go was impressive”, concluded Sandra.