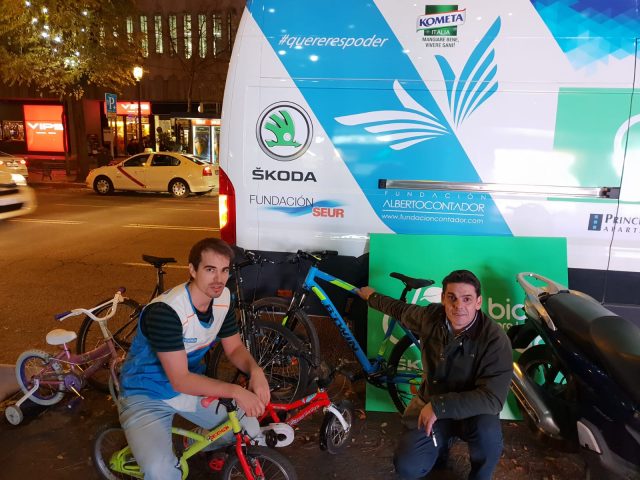 Bicis para la Vida by ŠKODA continues to capture new bikes for its different solidarity projects. The Fundación Alberto Contador project received a donation of six bicycles from the Decathlon store located in Ortega y Gasset street, in the Salamanca district of Madrid. Jesus Alberto, the head of this center’s workshop, was responsible for making this new delivery.

It is not the first time that the French multinational collaborates with the activities of the Foundation, altruistically giving in the past several consignments of bicycles for distribution among disadvantaged groups or sending them to isolated communities in foreign countries. The Ortega y Gasset centre, in a more autonomous way, has also previously collaborated by donating a dozen bicycles practically ready for delivery. “We are very grateful to Decathlon and Jesús Alberto for their collaboration with Bicis para la Vida by ŠKODA. It is a project that he loves, which in his day led him to contact us and for which every time they can not hesitate to help us within their means,” says Ángel López, responsible for logistics of the project.

The Ortega y Gasset store was the first large-format store of the French chain in the centre of Madrid, a new commercial concept that opened a new path within Decathlon, until then with more presence in the outskirts of towns, through medium or large establishments located in shopping centres and parks. Inaugurated in November 2017, this store in Ortega y Gasset was the forerunner of a Decathlon bet that had a rapid expansion of two more stores in the streets Princesa and Fuencarral.