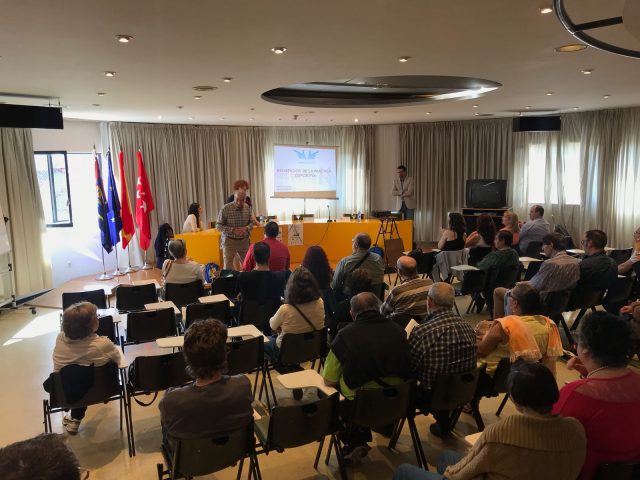 Within its field of action beyond a merely competitive facet, the Fundacion Alberto Contador has been one of the leading institutions this Thursday in the fourth day of the IX Municipal Health Week in Móstoles (Madrid), held at the Centro Cultural Villa de Móstoles. With the talk-talk “The benefit of sport in mental health”, co-organised with AUSMEN (Association of Mental Health Users of this southern Madrid population), the Foundation wanted to present the benefits that sports practice brings to all people suffering from some kind of mental illness, not only physically, but also intellectually and cognitively.

For more than an hour and a half, and in front of an attentive, interested and active audience, which also included the sick and their families, Fran Contador presented the benefits of physical exercise, highlighting the importance of a tool such as a bicycle for the achievement of all these benefits. As a presentation, he has also reviewed the different activities and initiatives that are carried out within the Fundación Alberto Contador. “From AUSMEN they contacted us to propose the possibility of talking about the importance of regular physical activity not only for the body but also for the mind. We thought it was a very interesting idea. Until now we have given talks and given lectures more focused on Ictus, its knowledge and its prevention, as it is not in vain among the objectives of the Foundation. But this has been the first experience in which we have approached the benefits of sport from a more generic perspective. We ended up very satisfied, because the attendees were very participative and they passed on many issues to us. Personally, I think we have planted a small seed for people to start practicing sports, to have that routine of periodic physical activity that will undoubtedly be very important for their well-being,” explains Contador.

The Móstoles Health Week continues to consolidate itself as one of the main meeting points between associations, both social and health, and institutions, mainly public, when it comes to transmitting and disseminating information, resources and even training for the sake of a better and more effective promotion of a healthy lifestyle and the prevention and treatment of diseases.