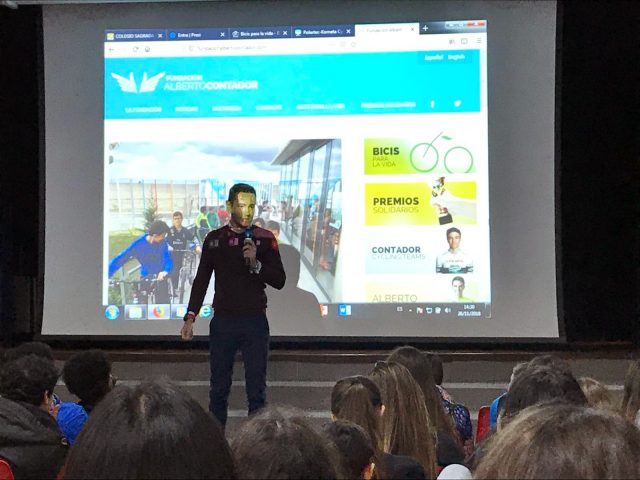 The Fundación Alberto Contador and the Sagrada Familia de Urgel School from Vallecas (Madrid) have reached an agreement for the implementation of an educational initiative among second year students of the ESO from which the project Bicis para la Vida by ŠKODA will benefit. The centre will start a campaign to capture unused bicycles, which will later be repaired by the students themselves as part of the technology classes and finally donated to the Bicis para la Vida by ŠKODA project. “This possibility arises from the two teachers who teach technology in the second year of ESO. One of the didactic units of the course has to do with mechanisms and the bicycle condenses many of the contents to tackle. There is no colour between a master class, theoretical, flatter so to speak, and the possibility of being able to manipulate, touch, see and experiment”, explains Miguel Salamanca, a teacher at the Sagrada Familia de Urgel School. “In our school we work on learning by projects. We are not only talking about a project linked to the subject of Technology. There are five or six subjects that will be articulated around this initiative, adapting it to their field and their needs. It is an interdisciplinary educational project. In the end, learning cannot be something compartmentalised; it has to be something more global, more interrelated… in this way, learning will be more significant”.

A collection campaign will take place between 5 and 22 December, to be followed in 2019 by practical classes in mechanics and bicycle repair, which will be held in the school’s multi-purpose room. Previously, the students will have had the opportunity to visit the Foundation’s workshop in the Madrid town of Pinto, where they will take a short bike ride. At the end of the course there will be the delivery of the bicycles collected and repaired. The school is also considering the possibility of this event taking place in the symbolic format of a cycling excursion.

They will not be the only school activities linked to the Foundation. Imparted The En Bici Project will bring the particularities of the bicycle, its technological foundations, its suitability as a means of transport and as a leisure and recreational element, the regulations regarding road safety, to students in the second year of the ESO.

Paco Romero, in charge of the project Bicis para la Vida by ŠKODA, Félix García Casas and Francisco Javier Contador, sports manager and general manager of the Fundación Alberto Contador, respectively, were at the centre’s facilities this past Monday 26th, where they introduced the students to the institution’s activities, its different fields of action and its objectives. “There are many aspects that a project like Bicis para la Vida by Skoda offers us and we are before a great example: not only are the bikes captured, repaired and delivered, but the whole process involves young students. It’s solidarity, it’s education, it’s awareness… We are very grateful to the Sagrada Familia school in Urgell for their interest in collaborating with this project”, says Romero.