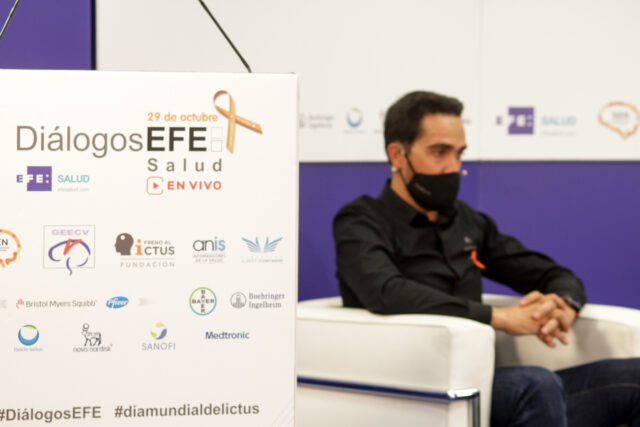 Alberto Contador: “At the slightest sign that you are suffering from a stroke, you have to go to the hospital; every second is important”

This Wednesday a new edition of the EFE Health Dialogues was held, this time on the occasion of World Stroke Day, which is celebrated on 29 October, and which dealt with this disease, which is still little known to a large part of our society. Organised by the EFE News Agency with the Freno al Ictus Foundation and the Spanish Neurology Society (SEN), through its cerebrovascular diseases group, this single-subject version of the EFE Health Dialogues was attended by Graziella Almendral, president of the Spanish National Association of Health Informers (ANIS); Dr. María Alonso de Leciñana, coordinator of GEECV-SEN; Julio Agredano, president of the Freno al Ictus Foundation; Yolanda Torosio, an actress and dancer suffering from stroke, and, representing the Foundation that bears her name and with the backing of her experience with the disease, the ex-cyclist Alberto Contador.

“This illness changed my vision of life”, explained an Alberto Contador who also recalled his experience with the disease: “I suffered an Ictus in the first person and I suffered it as a professional cyclist, during a Vuelta a Asturias. I had been suffering from terrible headaches for several weeks, but my desire to prepare for the Tour de France, my obsession with training well, made me put those pains aside. I didn’t give them any importance. The main problem, my main problem, was that I didn’t have any information about this disease. I was lucky, it could be solved and I could go on with my life in a more or less normal way. But not all cases are like that. This is a disease that conditions a lot and about which we still have very little knowledge”.

“A large part of society is not really aware of the impact that stroke has. Many think that it is something that only happens to older people. And look, my case was with 21 years old, a healthy, sporty person, who took care of his diet, with good habits in his day to day… It is also a problem just to stay in the numbers. You talk about the stroke, the mortality it causes… It seems that if there has not been a death, nothing has really happened. Of course that is not the case. The truth is that behind every case there is much more history. The impact behind each case is tremendous and in our environment we certainly all know cases. A young person, under 40 years old, with four children of whom the oldest is 12 years old, their own family obligations, work… And from one day to the next that older child is the one who has to dress you, help the younger siblings. Situations that make you see even more the seriousness of this disease,” he explained. During another of his speeches, Alberto Contador showed a certain optimism with the social changes he is perceiving in terms of greater health care through physical activity: “Society is increasingly aware that it has to have a much healthier lifestyle, that it has to practice sport, that it has to take more care of its diet or acquire healthier habits in terms of alcohol or tobacco consumption. Today more people than ever before practice sport on a regular basis. For me it is one of the best treatments to prevent stroke. I am a little more optimistic, although it is also clear that there is still a lot to do”. The changes, from their optimum, are also taking hold at company level and he gave the example of Kometa, one of the sponsors of his sports structures: “They have reduced the use of salt in the manufacturing process of their products by a large percentage”.

Finally, Contador also wanted to highlight the importance, already highlighted in recent months by medical groups in the context of health emergency, to go to a hospital at the slightest sign of a stroke: “You see the news every day, with all this situation that is being lived with the COVID-19, and it is something that is taking its toll when it comes to hospitals. I’m going to wait’ or ‘I’ll come later’… There is a certain fear of going to hospitals. And no. From here I want to encourage everyone that, at the slightest sign of suffering a stroke, you have to fly and go to the hospital; every second is important and it doesn’t matter if we are in the middle of a pandemic. Things are now much better organised too”. Julio Agredano, president of the Freno al Ictus Foundation, together with which the Alberto Contador Foundation has launched the Pedalea contra el Ictus initiative, summarised very well in three points the main message that must be underpinned in society’s conscience: “Firstly, this disease must become much better known throughout the world. Second, it is important to be clear that it is a time-dependent disease, so we must know how to see the symptoms, as every second counts. And thirdly, it is an illness after which those affected find it very difficult to return to what has been their normal life”.