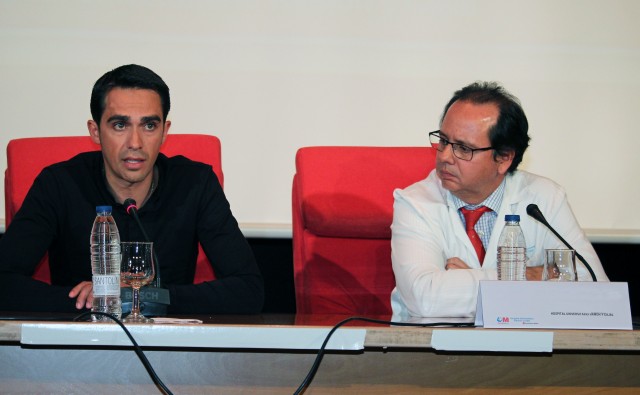 Alberto Contador, protagonist in the ‘First Day of Stroke’s Divulgation’ at the Ramon y Cajal Hospital

Alberto Contador, protagonist in the ‘First Day of Stroke’s Divulgation’ at the Ramon y Cajal Hospital

Alberto Contador offered his full support to the ‘First Day of Stroke’s Divulgation’, held at the Ramon y Cajal Hospital in Madrid, where was treated and operated himself of this disease which, he said, “changed my way of seeing life and helped me to appreciate the really important things”.

During this day were presented to the public the results of research carried out at the Ramon y Cajal Hospital on the ‘Impact of Stroke in Young’, a project that has been sponsored by the Alberto Contador Foundation and has yielded some impressive results, such as the progressive incidence of this disease in young people, not more than 56 years old.

Of the 830 patients admitted in 2014 at the Ramon y Cajal, 110 were under 56, over 13% of the total, representing a significant increase in reference to the previous data. Among these patients, with an average age of 46 years, 85 percent had at least one risk factor, most notably smoking, hypertension, obesity and psychosocial stress, a concept not investigated to date but that has a high incidence (about 60%) among young stroke victims.

The good news of this Divulgation Day is the improvement in the prevention of this disease as well as treatment, which highlights the speed of health care in Madrid’s hospitals, that have managed to dramatically increase the cure rates, both survival and to overcome the disease without sequelae.

Alberto Contador, meanwhile, offered to the public the story of his own experience with the disease, noting that when he suffered, “I noy knew the symptoms at all. Although I had strong headaches on days before having the stroke, I did not imagine what happened to me, why it is so important that people go to the hospital as soon as they notice something odd. In this disease, every second counts”, said the leader of Tinkoff-Saxo team, who reiterated his commitment to divulgation and fight against a disease “that affects life along one of every six people and at any age”.

Asked by the media who attended the event, Alberto Contador also unveiled the race schedule which plans to meet in 2016. “It’s a classic calendar”, said the triple winner of Vuelta, Giro and Tour. “Almost certainly I will start in the Tour of Algarve, this year I will return to Paris-Nice and follow with Volta a Catalunya and the Tour of the Basque Country. There I will initiate a period of rest to return then to the Dauphine Criterium and Tour de France”. Finally, the leader of Tinkoff-Saxo said targeted the Olympic Games, both road race and time trial.

Contador also reiterated that 2016 “may be my last season, unless I suffered a mishap in the Tour de France”. If that happened, he said his first choice is “talking with my team, Tinkoff, to continue for another year. If that were not possible, also would be a very attractive option to pursue a personal project, if we get a sponsor to get a professional team with my Foundation, which would continue the work we are doing with young riders”, he concluded.