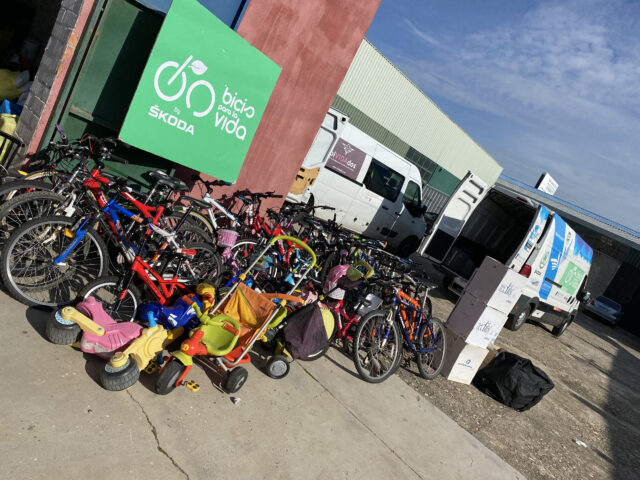 The project Bicis para la Vida by ŠKODA handed over a contingent of 44 bicycles to the spanish NGO ‘olVIDAdos’ this Friday in San Sebastian de los Reyes. These bicycles will be sent to the overcrowded refugee communities on the Greek island of Lesbos to serve as a means of transport or, above all, to the youngest, also for leisure.  Sportlast and Tacx, the firms sponsoring the Contador Foundation’s sports projects, have also wanted to join in this initiative by donating equipment. In the case of Sportlast, with four boxes of socks and compression stockings. From Tacx, with 300 bottles. The Greek island, located near the Turkish coast, has been in the front line of information during the last few months due to the extreme situation in which thousands of asylum seekers live in precarious settlements. The Mória camp, originally designed for some 2,000 people, ended up exceeding six times its capacity.

“In a facility designed for 2,000 people, there were more than 13,000. And in deplorable conditions, without water since last September. There are many people who have not been able to dress up or wash their clothes for a long time”, explains Olga San Martín, one of the co-founders of olVIDAdos. The Madrid-based NGO, through institutions and organisations in the Navarre region, launched a first shipment of food and material earlier this month. This situation of overpopulation aggravated the shortcomings of already very deficient facilities and served as a breeding ground for various social conflicts, in the context of the health emergency caused by COVID-19, which took shape at the beginning of September in a dreadful fire, with several subsequent aftershocks, which reduced all the facilities to ashes. Despite the resettlement and reconstruction work, heavy rains in early October aggravated the hardship by flooding several areas.

In the area around the refugee settlements, which cover large areas of land, bicycles have become very important for the organisation and distribution of aid, according to the Oblivion. Seur, in collaboration with Bicis para la Vida through its Foundation, has been responsible for collecting and delivering all these bicycles, which will now have a second life in one of the most needy places on the continent. Several repair kits are also distributed with the bikes to keep them fully operational. “All the support is important and necessary to give continuity to the projects”, thanks San Martín.