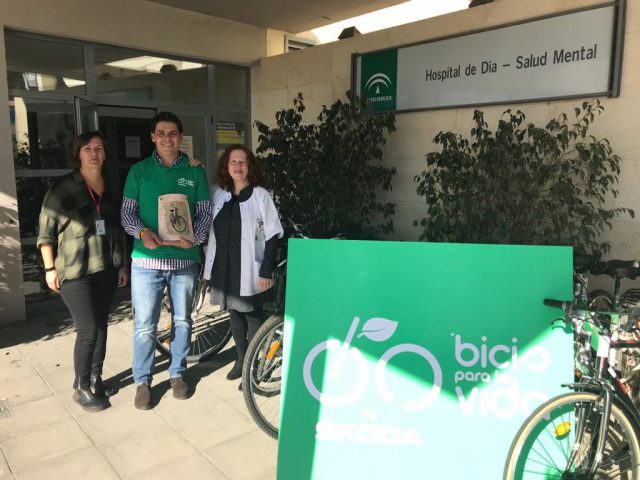 Intense weekend in the bosom of Bicis para la Vida by ŠKODA. The project promoted by the Fundación Alberto Contador and supported by the Czech automobile firm tackled a double action in the province of Málaga (Andalucía), first with a donation of material to the Mental Health Day Hospital La Axarquía in Torre del Mar and later with the reception of several bicycles in the Decathlon shop in Mijas.

Bicis para la Vida by Skoda delivered eighteen bicycles to the prestigious Malaga hospital, an action coordinated by the occupational therapist Esther Domínguez Macías that will strengthen the implementation of the Cyclosalud program. This initiative of its Clinical Management Unit is a new tool for recovery with objectives that are in line with the aims of the project: to improve the physical health and emotional well-being of the patient by promoting the creation of healthy habits.

Similarly, the use of the bicycle aims to promote the autonomy of the individual and the empowerment of their personal capabilities. The development of Cyclosalud, although it will also have a more individual facet, will above all have a more group and participative aspect that will promote social relations and teamwork. In gratitude for the donation, Angel López, responsible for logistics of Bicycles for Life by ŠKODA and responsible for the delivery, received the gift of a handmade craft, a tile on the back of which were collected some moving words of appreciation for such a fundamental contribution to the implementation of Cyclosalud.

It was not the only action that took place on the Costa del Sol. Within the framework of the growing collaboration with its network of centres all over Spain, and weeks after a last donation led by its shop in Ortega y Gasset street in Madrid, the Bicis para la Vida by ŠKODA project received ten bicycles from Decathlon’s shop located in the Miramar Shopping Park in the Malaga town of Mijas. A delivery made by Silvia and Nacho, respectively in charge of the store and responsible for the cycling section of the center.