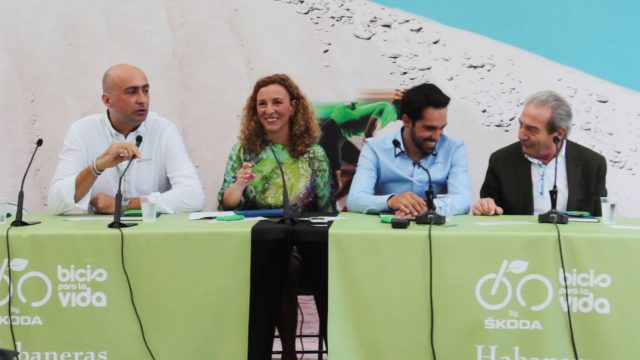 The Grand Depart of La Vuelta from Torrevieja and the province of Alicante has motivated the celebration of various initiatives in which the bicycle has been the main argument thread. The project Bicis para la Vida by ŠKODA has also been present in the context of the Spanish race thanks to a very generous donation of bicycles received through an initiative promoted by the Habaneras Shopping Centre.

Alberto Contador, president of the Foundation that bears his name, Paco Romero, responsible for the project within it, Ramón Mayo, president of the Seur Foundation, Conchita Rubio, manager of ŠKODA-Grupo Rubio, and Joan Massallé, responsible for sponsorship of ŠKODA Spain, came at 11.00 in the morning of this Monday August 26 to the shopping center torrevejense to receive 120 mounts that the firm of urgent transport will be responsible for transporting to the facilities of the Foundation to proceed to its classification and distribution, after fine-tuning in cases that were necessary.

“We are very grateful to Habaneras for having thought about our Foundation and our project Bikes for Life by ŠKODA. This very generous donation will allow us to make many deliveries in the coming months among disadvantaged groups both in Spain and abroad,” says an Alberto Contador very happy for the realization of such consideration.

“Bicis para la Vida by ŠKODA continues to grow little by little from the clear and firm intention of making life easier for many people and groups with a bicycle that, for whatever circumstances, has ceased to have a use. The fact that more and more institutions and organisations are taking us into account for their donations satisfies us, on the one hand, and on the other hand generates a greater responsibility, if possible”, says Paco Romero.

“Today we have reached the culminating point since we began our relationship with Bicis para la Vida by ŠKODA. With this delivery, there are already around 500 bicycles collected in 50 ŠKODA concessions. We are very proud of our relationship with the Alberto Contador Foundation in this solidarity project that brings the world of cycling closer to all groups. And what better environment than in a stage of the Tour where ŠKODA is also one of the important actors, with the sponsorship of the green jersey and more than 120 vehicles in the squad between the official cars, the race tracking cars, those of the organization or twelve of the twenty-two teams present in this edition”, emphasizes Joan Masallé.

The Habaneras Shopping Centre, in collaboration with ŠKODA-Grupo Rubio, launched last August 1st a campaign in which all visitors to its facilities could pedal on one of the bikes located for this purpose in one of its busiest areas. For every 18 kilometres pedaled, the centre would donate a bicycle to the Bicis para la Vida by ŠKODA project. In order to provide it with a small competitive component, each participation lasted two minutes.

In order to encourage participation, each week, the participants who had accumulated more kilometres would receive a bicycle. For all those who had participated, many other gifts were raffled, among which were VIP passes for some of the stages of the Vuelta.

The command of the Guardia Civil of Torrevieja has been fundamental to the implementation of this action of solidarity. Fruit of several actions against criminal gangs in recent years, the Armed Institute was apprehending and seizing among many assets many of these bicycles that were donated to the mall, and repaired by courtesy of the Grupo Rubio, in turn recipient of many other bicycles, with the firm commitment to encourage solidarity actions.