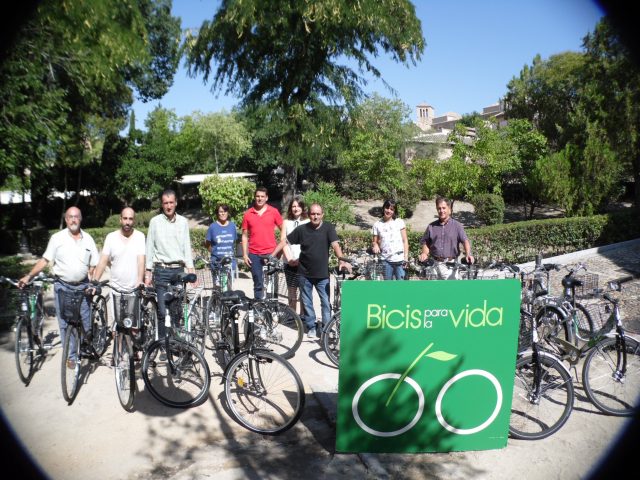 The Bicis para la Vida (Bicycles for Life) programme, co-sponsored by the Alberto Contador Foundation, the Ananta Foundation and the Seur Foundation, has developed three new actions over the course of this week as part of its commitment to stimulate and collaborate with the recovery and reintegration of some of society’s most disadvantaged groups through the benefits of cycling. Up to 56 bicycles that face a second life with the firm intention of contributing their pedals for these purposes.

Firstly, the project delivered twenty-one bicycles to the special education centre that the Mothers of Hope Foundation has in the Toledo town of Talavera de la Reina, a centre set up in 1973 which works with students with special educational needs and trains them in their transition to adult life.  “We are very grateful for the contribution of the Foundation to our entity: just seeing the first contact, we are sure that the children will enjoy this new activity very much,” they stressed from this center.

The community Hogar Zoe, with its headquarters in the outskirts of Toledo, was the next institution to receive a donation of bicycles. Up to seventeen saddles were given to the people in charge and interns of this social integration and rehabilitation center that since 1987, with the support and tutelage of the Daughters of Charity of Saint Vincent de Paul, works with young people with drug addiction problems. This Wednesday the last donation took place: the delivery of eighteen bicycles to the urban therapeutic centre of the Jesús Abandonado Association of Toledo, an institution created in 1994 to help the rehabilitation of people with alcohol problems which since 2004 has its headquarters in the city of the three cultures in San Torcuato Street.

President of this association, doctor Fernando Jiménez Díaz points out: “For an organization like ours, with the aim of rehabilitating people with alcohol problems, physical activity is a great ally. The possibility of having these bicycles donated by the Foundation is an important boost to our plan of activities. We work with people who have fallen into this disease and who need comprehensive support not only psychological, but also physical. And the bicycle, as a whole, provides a very high benefit. It is an open-air activity, group, which also raises a potentiation of fatigue and therefore a better sleep in a patient profile with delicate habits”.