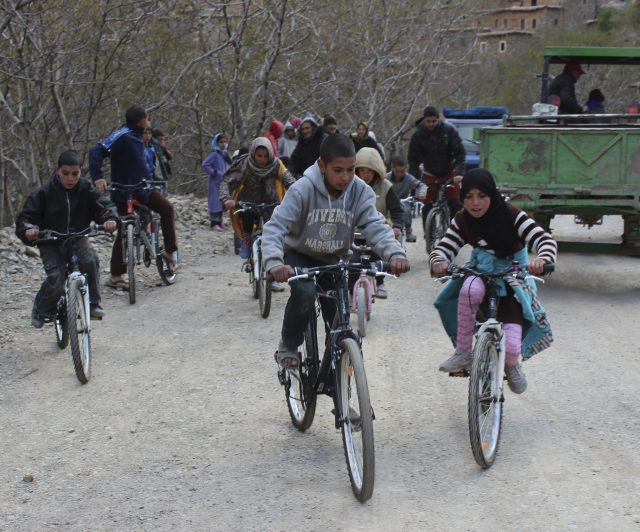 The Bicis para la Vida campaign promoted by the Fundacion Contador, the Fundación Ananta and the Fundación Seur has been one of the protagonists of “Tres mundos, solidaridad” (“Three worlds, solidarity”, into english) programme on Radio Nacional de España, which in its last broadcast focused on the bicycle and its possibilities as a tool to fight against inequalities.

“Leisure, pleasure, fun. This is what most developed countries evoke in bicycles. In Spain there are an estimated thirty million bicycles. Three out of four Spaniards have one at home. And cycling is for many children a game. In Africa, however, a bicycle is much more, it is an opportunity”, says its director and presenter Elena Nieva.

The programme deals with the work of Bicis para la Vida in the Moroccan High Atlas. “Quite a complex terrain, the bike can help them a lot. They are poor regions, with a lack of resources, and these vehicles are essential for their daily lives,” contextualizes Paco Romero, who is responsible for the project. Several villages in the Tessaut Valley, such as Taghoute, Azzarzan, Agenso and Ait Hamza, have benefited from the release of material and have been effectively involved in its maintenance.

“Tres mundos, solidaridad” is a radio show that is broadcast every Monday at 9.05 p.m. on Radio 5 and Radio Exterior de España. The central theme of the programme is solidarity and in each edition it deals with the work of non-popular Non-Governmental Organisations (NGOs), as well as public and private companies and institutions working towards a more just society.