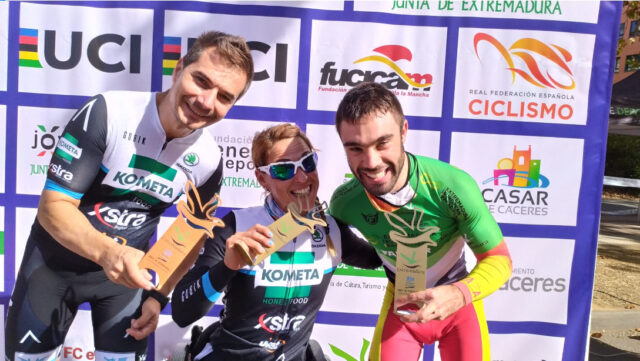 The Extremadura European Paracycling Cup, the first event in which the ambassadors of the Idemticos project take part

Carlos Javier Mozos, Eva Moral and Gonzalo García, who has joined the Spanish national team, participated in the Extremadura European Paracycling Cup last weekend. A competition that, in these times so conditioned to the evolution of public health and the health emergency, was the first in which the ambassadors of the new project Idemticos of the Contador Foundation took part with their new condition. A double venue hosted the development of the competitions. On Saturday, for the time trials, the town of Casar de Cáceres. On Sunday, in Cáceres, the capital, the online races.

García Abella did a double in the T1 category by setting the best time in the time trial and winning the on-line race. The same result was achieved by Eva Moral, who continued to explore the world of adapted cycling with a double in H4 ahead of Milagros López Vernet and Pilar Montoya López. In the C1 category, Carlos Javier Mozos finished in a double third position behind Ricardo Ten and the Portuguese Bernardo Vieira.