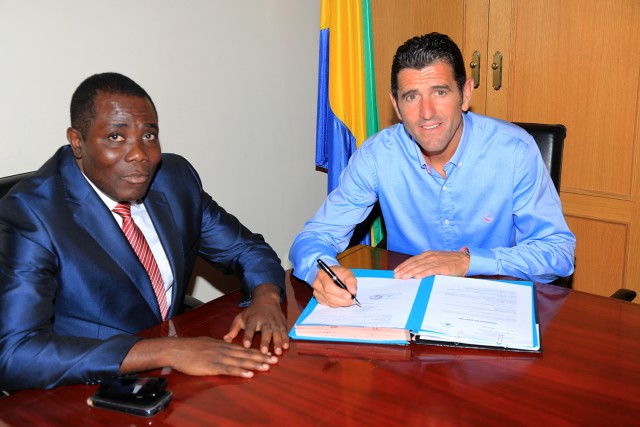 Abraham Olano has launched today the journey that will take him to Libreville, capital of Gabon, where he will serve as cycling national coach and will be in charge of the development program of this sport.

Olano has signed a one-year contract with the Gabonese Cycling Federation, led by Maurice Nazaire Embinga, which earlier this year moved to Madrid to meet the future national coach and agree on the lines of the work in Gabon.

The agreement between the FEGACY and Abraham Olano has been possible thanks to the efforts of Alberto Contador Foundation, to which the leaders of the Gabonese cycling went to request advice both on finding the right person as national coach and to initiate a collaboration long-winded in the promotion and development of cycling in this African country.

Abraham Olano travels to Gabon with short-term goal of improving the performance of the Gabonese national team in the Tropicale Amissa Bongo, whose next edition will take place in January 2016, but above all with the intention of finding and developing new talents among young athletes in this country.

To do this he will work in coordination with Alberto Contador Foundation, which in the coming months plans a shipment of bicycles through its ‘Bikes for Life’ program. Distribution and use of this material more efficiently will handle field himself Abraham Olano, whose idea is also to improve the training and performance of Gabonese cyclists sending them to Spain, where they could train and compete with teams of Alberto Contador Foundation.