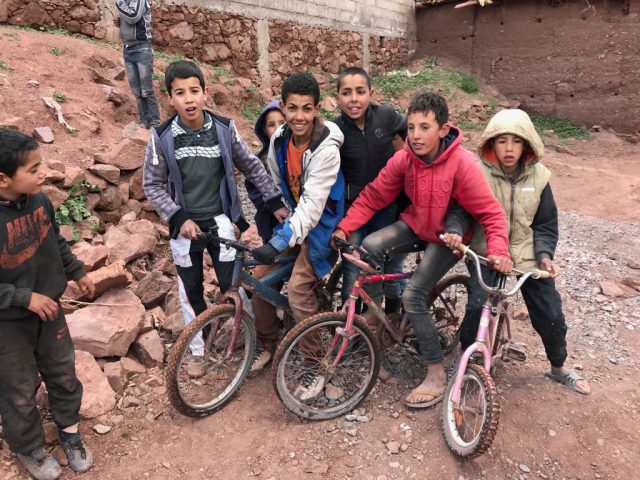 Bikes for life in the Tessaut Valley

They say that bicycles are the most special toys for children, because they begin to give them autonomy, they give them freedom, they even teach them that after a fall they always have to get up; they also reinforce their confidence and safety with the unconscious triviality of daily use or the unconscious acquisition of skills. And many other things. “Nothing compares to the simple pleasure of riding a bicycle”, John F. Kennedy once said. They are games, they are transport and, what things, in many parts of the world they also bring hope; they are a first step towards a better future, a tool for prosperity. A bicycle! Something so simple! But… that’s right. And a good example is found in the Moroccan Alto Altas. In the Tessaut valley, in the vicinity of the river of the same name, the Bicis para la Vida programme works with the firm, direct and sincere aim of fulfilling its own name. During the last year, in several villages of this remote valley, almost a hundred bicycles have been received as a result of this initiative, jointly promoted by the Fundación Alberto Contador, the Fundación Ananta and the Fundación Seur. Their objective is simple and they have been able to benefit from it in the enclaves of Taghoute, Azzarzan, Agenso and Ait Hamza: to capture and collect discarded or disused bicycles, in some cases even destined for garbage, to repair them and give them a new life by giving them to groups with problems of social exclusion or, as is the case, to isolated communities in developing countries.

“For the Fundación Alberto Contador, Bicis para la Vida is a key project, a demonstration of its commitment to society. We have many projects related to cycling and the promotion of cycling, and all of them cling to the motto that Alberto often proclaims: “We want to give back to cycling everything that cycling has done for us”. But Bikes for Life is no longer just about commitment to cycling, but also to society. And within this, with the most disadvantaged groups”, says Paco Romero, head of the project within the Fundación Alberto Contador. The repair, which until now has had the fundamental contribution of the Association of Disabled People of Pinto in the work of the workshop, or the delivery are two steps as necessary as the control of a correct use of the frames. Through the Geoda Foundation, which has been working on development programmes in these areas, we supervise not only the correct use of the bikes, but also their optimum maintenance. Bicis para la Vida encourages care by training one person in each village in these skills. And the children, with these bikes, have at their disposal a means of getting close to the school. The children and also some older ones. This is a mountainous region. A rough geography. It’s an unkind land. And survival is hard. “Rugged, inhospitable, naturally beautifully hard terrain”, sums up Susana Pato, from the Fundación Ananta. “Land in which, with the work of the four foundations involved, we can be making the dream of many a person come true and giving life, a second life, to bicycles that were about to give up,” Romero adds.

The program has recently delivered new bikes. About thirty. A real event for the people. And an adventure. It will take up to three days for the truck that transports them from Pinto (Madrid) to arrive and, once it crosses the strait, it resumes its route in Nador. In Azzarzan, local life was revolutionised, with all the young people enthusiastic. It’s a party. An impromptu party. The pikala party. “Pikala” in Tamazight means “bicycle”. And the little ones chant the good news. Yes, Azzarzan is a party. “All together, children, adults and volunteers in solidarity live the experience of sharing their daily reality: to go to school by going around the steep profiles of the mountains that come out of Azzarzan to reach the school, facing endless slopes and tight curves with the bikes that will facilitate this journey for the youngest and give support to the elderly for their daily tasks thus facilitating their tasks for better survival. The emotion captivates the breath and stops the thought”, evokes Susana Pato. “We wanted to check the condition of the bikes, see how they were being used and analyse possible needs for deliveries in the near future. But in the end, this trip turned out to be a vital experience because of the fact of seeing in situ how this help contributes to improving the lives of groups without resources. It’s amazing to see the happy faces of those kids riding their bikes. They don’t need the latest videogame with their Internet connection, or the latest model of wheels or shoes; they ride on flip-flops and their best companion is not connected thousands of miles away, their best companion is you and the friendship you offer them”, explains Paco Romero.

“Everyone wants to pedal, sometimes without reaching the saddle… even without knowing how to ride! But emotion moves the human being. That’s when the time you spent identifying the bikes, fixing the pedals, saddles and brakes, or putting them on the truck is far away. You don’t even remember the hours spent in a ramshackle van, shared with people, animals and food, who enter the valley as the only link between civilization and the people who live in a corner of the great Moroccan atlas, clothed in huge rocks of red earth, sheep, firewood and the Tessaut River”, explains Pato. “What is more difficult to imagine are the overwhelming feelings of gratitude, joy, unbelief, excitement, excitement, joy and generosity that emerge from the hearts and smiles of those who receive the help we have so selflessly and enthusiastically provided”, adds.

“The end of the party,” Romero concludes, “was the bike route we took along the roads that connect several villages in the valley, a bike ride with dozens of children and even some adults who joined us. That day no one was competing in a stage of the Giro d’Italia, but the excitement and enthusiasm with which these kids rode their bikes and climbed these slopes had nothing to envy the ascents of any stage of the Giro… And for us there is nothing more beautiful than being able to connect children and bicycles”.