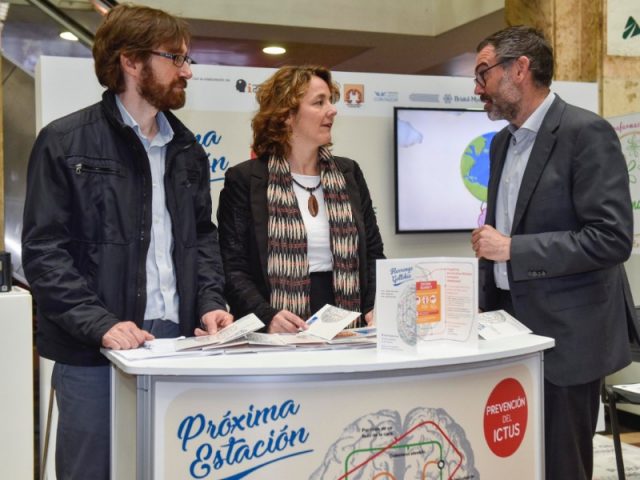 The Abando-Indalencio Prieto station in Bilbao will this week be the first stop on the new tour that the ‘Próxima Estación Prevención del Ictus’ campaign will face during 2018 with the aim of promoting awareness and prevention of this disease.

During these next Wednesday 13 and Thursday 14 June, this important Biscayan communications hub will host an initiative that will later call at the María Zambrano railway station in Malaga (27 and 28 June) and at the Santa Justa railway station in Seville (first, from 24 to 26 October, then from 20 to 22 November). “We are looking for this campaign to be set up in places where many people pass by, places that allow it to be highly visible and that stimulate the dissemination and knowledge of the message. The double visit to Seville has a special significance. On the one hand, for the celebration of World Ictus Day on October 29th. On the other hand, for the celebration of the Annual Congress of the Spanish Society of Neurology”, Julio Agredano, president of Freno al Ictus, contributes. The Congress on Cardiovascular Diseases will also take place in Seville at this time. At the same time, several trains present promotional ornaments with silkscreen printing, the theme of which is linked to the campaign.

‘Próxima Estación Prevención del Itus’ was an initiative promoted by the Freno al Ictus Association in October 2017. An action that began its journey in the Moncloa transports interchange in Madrid, with great success and welcome. The impact has encouraged the alliance of BMS-Pfizer pharmaceuticals to extend this campaign to other geographical areas and make it a travelling exhibition.

The Fundación Contador, which in one of its foundational principles marks the fight against ictus, signed last March a collaboration agreement with the Freno al Ictus Association to achieve “a greater and better awareness of the dimension of stroke in the population, as the only effective way to prevent and reduce the impact of ictus”.

Ictus is a cerebrovascular disease that represents the first cause of death in women, the second in men and the main cause of severe disability in adult life in Spain. It is estimated that a total of 120,000 people are affected each year in Spain. Although 80% of ictus are preventable, it is estimated that every two seconds someone in the world may suffer from it. For this reason, prevention and control of risk factors, such as diabetes or atrial fibrillation (AF), is essential. It is the most common heart rhythm disorder and affects 1 in 4 people age 40 or older.

More information about the campaign:
http://www.estacionprevencionictus.es/