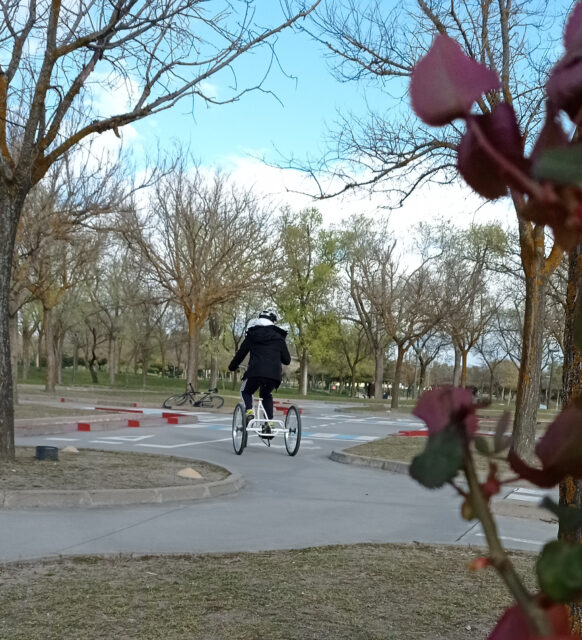 “When I first got on I was terrified, but within five minutes I had got the hang of it”

The fleet of bicycles of the Idemticos project continues to bring all those interested closer to adapted cycling. The latest experience has been that of Juan José de los Ríos, a young man with brain damage who has been learning how to ride an adapted tricycle. “Before my accident, I used to ride a bike regularly. When I tried to get back on a bike, I suffered a fall that left me out of work for three months… That’s why it seemed impossible for me to get back on a bike that wasn’t an exercise bike, I mean: to ride a real bike,” explains Juanjo. “I have to confess that when I rode I was terrified. But after five minutes I had got the hang of it. I know I still have a little way to go, but it was really good. I think the tricycle is great”.

“I am very grateful for this experience. Alfredo is a person with a great human quality and a brutal empathy”, he concludes. “Juanjo was very nervous at first because of the sensation of moving around on the tricycle. But as soon as he got used to it, he couldn’t stop and was very happy. And most importantly, he wanted to do it again”, adds Alfredo Sánchez, one of the people in charge of the project.

Juan José, with the tricycle, and Juan Carlos, with the handbike, were the latest users of the Idemticos project, the aim of which is to make a fleet of bicycles available to various groups with functional diversity so that they can access the practice and discovery of this sport. The Idemticos project activities are open to anyone, regardless of sex or age, and initially take place during the hours of the Plaza Éboli Cycling Academy with the support and supervision of a monitor.