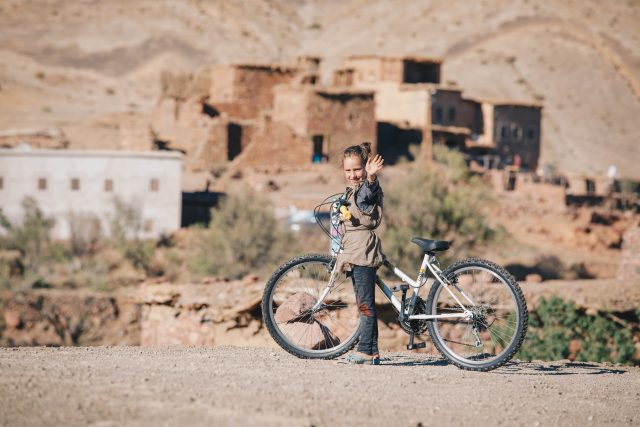 Bicis para la Vida by ŠKODA, after overcoming several administrative refusals on the way, concrete its fourth distribution of material in Moroccan territory

Each solidarity expedition of Bicis para la Vida by ŠKODA to the Moroccan High Atlas has an inevitable adventure component. Sometimes, most of them, due to the precariousness of the infrastructures and the harshness of the orographies in which high peaks of more than 2,000 meters alternate with deep and steep valleys. Others, in which one cannot lose sight of the above, due to a climate even more severe than usual. And also, because it is intangible, there is the human factor. If a few months ago the narrowness and narrowness of some roads greatly complicated the last delivery, on this occasion has been the course of action of the authorities. A way of acting that has forced the recipients of aid to vary as they go along. If initially the Bicis para la Vida by ŠKODA project caravan had headed for the villages of Imi Tazgi and Azioul, after being held at Tangier customs for more than six hours, less than twelve hours before reaching its destination, a new problem was forged by the authorities of the province of Azilal. Until now the initiative had always distributed all its material in population centers of this province, but the supposed complaints of the rais of a village, annoyed because the delivery was going to take place in another one that was not his as wielded from the governorate, impelled the provincial maximum responsible to refuse the permission to carry out the delivery.

The rapid reaction of Hafid El Rhadiouini, the usual interlocutor of Bicis para la Vida by ŠKODA in Morocco, made it possible to manage on the fly the necessary settlements to be able to carry out the delivery in a village in the neighbouring province of Ouzarzate, further south. There are many shortages in the whole area. Too many. Tamezrite became the new destination for receiving aid. The change, forced, did not modify in the slightest the thanks with which the expedition was received. Neither the commitments of the receivers, who sign the receipt, commit themselves to take care of all the material. For this trip, two Bicis para la Vida by ŠKODA vans and the Seur Foundation transported fifty bicycles and a large quantity of material donated by John Smith, Sportlast and, for the first time as part of the experience, the Getafe Football Club Foundation. His French-Moroccan player Fayçal Fajr wanted to give the starting flag to the trip: “I wanted to send an affectionate greeting to the children of the Tessault Valley, in the High Atlas, in Morocco”. “Luckily everything went well, the donation was a success as in every trip we have lived, the group of volunteers who did the work of cooperation ended up becoming a family, creating a union that was the one that made us overcome all the adversities we encountered. Finally, seeing the face and feeling the happiness of those children receiving our help more than compensates for all the risk we have to take on each trip, as well as all the obstacles and barriers we face and have to fight with. That is where the Alberto Contador Foundation wants to be, it is our foundation’s commitment to society and especially to the most disadvantaged groups”, contextualizes Paco Romero, in charge of the project Bicis para la Vida by ŠKODA.

Among the members of the expedition were Susana Pato, manager of the Hotel Princesa de Éboli in Pinto, Ángel López, head of logistics for Bicis para la Vida by ŠKODA, Atila Madrona, photographer and video operator, José Manuel García, winner of the draw among all the bicycle donors to join this trip, and Jesús Alberto, workshop manager of the Decathlon shop on Calle Ortega y Gasset in Madrid. “The journey itself is a brutal experience because of everything that is lived in it. In the end the trip is the auction of all the work that is done from the Foundation. Seeing how the children receive that bicycle with its face of joy and fear is priceless. For them we are a kind of extraterrestrials who have fallen from the sky. And in the end all the things that happen to you until you get to your destination, the six hours of customs, I don’t know how many hours of travel … All that in the end are anecdotes because everything you live in those moments makes you forget,” explains the latter. “This is a project that I find exciting, not only in its Moroccan dimension, but also all the donations that are made at the national level, Everything that entails motivates me to continue collaborating both on a more personal level and from my Company”. “Every trip to Morocco is an adventure, no matter how you program the itineraries, in the end always happens something that changes the plan completely. In this last incursion, a traffic accident two hours after leaving made us delay all the schedules we had planned, delaying the time to catch the ferry; later we found that the Moroccan police held us in the customs post during a hell of almost six hours, without water or food. Finally we were able to arrive at our first accommodation (Assilah) around 4am. The following night, when we arrived in Demnate, after two whole days on the road crossing Spain and Morocco, we found the news of the refusal to deliver bicycles in the villages selected for political reasons. Luckily, and thanks to Hafid’s praiseworthy work, the problem was solved by looking for another village that would become a beneficiary of the donation”, concludes Romero.