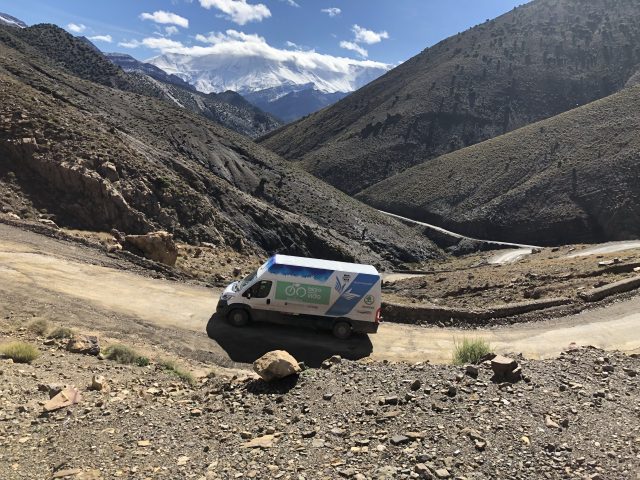 The Bicis para la Vida by ŠKODA project, sponsored by the Fundación Alberto Contador, returned last week from the Moroccan High Atlas after developing a new delivery of bicycles in the Tessaout valley, the first with the fundamental support of the Czech automobile firm after its recent landing in this initiative. A delivery campaign marked by adverse weather conditions, with several routes cut to traffic by snow, water and some landslides, which hardened the conditions of travel and distribution in an area of complex accesses and poor infrastructure. On this occasion the village of Tagulast was the destination of twenty-five of the bicycles donated to the Alberto Contador Foundation. At the same time, thanks to the generosity of two anonymous contributions in the run-up to the preparations, half a hundred balls and sneackers were distributed among the children of the village, gifts that rounded off the festive atmosphere with which the convoy of Bicis para la Vida by ŠKODA was received. The trip has also made it possible to meet some of the recipients of previous deliveries, able to negotiate in recent days the food shortages arising from a strike of transporters in the region thanks to their pedals.

“The faces of joy of all these children, the happiness that is breathed in the atmosphere… It is something indescribable. As we always say, this project is a reflection of the Foundation’s commitment to society, especially to the most underprivileged groups. For us this project is something wonderful. In the end, the Foundation has a commitment to society, especially to the most disadvantaged groups, and we firmly believe that we can help many people both in Spain and in other countries by giving them, on the one hand, a means of transport that is also ecological and healthy and, on the other, a tool that can also stimulate their economy. It is a very global project, with many areas of help, with many implications,” says Paco Romero, responsible for the project. Hafid El Rhadiouini, an interlocutor with the Fundación Alberto Contador on Moroccan soil, adds: “We are very grateful to all those people who have thought so hard about helping people through this project. And of course to their promoters, for making it possible. The people in the valley are very happy and without a doubt it can be said that the lives of many children and adults are much better. The conditions in these mountains are hard. Thanks to bicycles, distances are shortened, time is saved. And in an environment where there is no technology, bicycles are the realization of a dream of modernity. As well as being used as a means of transport to school, it has also stimulated the practice of sports from a very playful prism. The children have even organised their own small competitions”. Bicis para la Vida by ŠKODA project, where you can also track the donated bike, whether it has been delivered or not and, if so, where it is. Ángel López, responsible for the project’s logistics, says: “Basically there are two ways of getting the bicycles to us: one, through the Seur centres, whose foundation works very closely with us; it is enough to take the bicycle to one of its centres, indicating that it is for the Bicis para la Vida project and they send it to us free of charge. On the other hand, thanks to the support of ŠKODA, some points of its network of dealers are also receiving centres. We work with three types of traceability with the bicycles we receive: those that arrive in perfect condition, those that need some kind of adjustment and, finally, those that come in worse condition. Does that mean they are for scrapping? Not at all, we are studying how to use the material, for example for spare parts”.

Looking ahead to a new trip to the High Atlas, Paco Romero outlines an interesting initiative: “Looking at the faces of all these children is something that is difficult to explain in words. We think that it could be very interesting that in a future issue donors have the opportunity to live it in situ. That is why we will make a draw among all those people who have given us a bicycle for this project so that they can accompany us”.