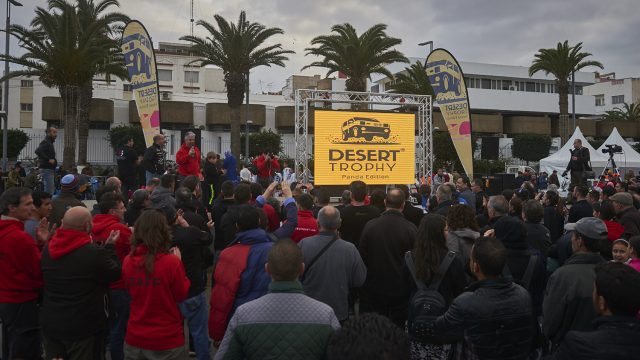 Bikes for Life, in collaboration with the organizers and participants of the III Desert Trophy Rally Panda Edition, has carried out a new bicycles delivery, this time for children from three of the villages located within the territory of the National Park of Alhucemas, in the north of Morocco. The delivery of the bikes took place during the Day of Verifications of the Desert Trophy Panda, in the Square Mohamed VI of Alhucemas, a locality that has unconditionally supported this new action of Bikes for Life. The Department of Cooperation and Development of the city was in charge of coordinating the act of delivery and made available to the children of the National Park the buses that took them to Alhucemas to come and pick up their bikes.

The selection of beneficiaries of this batch of bikes was carried out by the NGOs Group for the Development of the National Park of Alhucemas (RODPAL), which were the ones that pointed out the need to have a sustainable means of transport in the surroundings of the park, marked by the distances between these villages, since only in the largest of them there is a school, to which the children who live in the National Park must go daily.

Participants in the III Desert Trophy Panda were in charge of delivering the bikes, which were previously unpacked and set up, in an emotional act that highlighted the work of Bikes for Life and the invaluable cooperation of both the organizers of the Rally and the local NGOs that participated in the distribution of the bikes.

This was the third occasion in which the Desert Trophy Panda conciliate this off-road race in Morocco with a close collaboration with Bikes for Life, transporting and delivering bicycles donated in Spain by individuals and companies such as Decathlon, whose shop in Pinto has worked unselfishly on this project.

The organizers of the Desert Trophy Panda, Sports-Adventure.es, will continue their collaboration with Bikes for Life on the occasion of the next edition of the Bike Desert Trophy, a race of mountain bikes that will take place next June in the Moroccan Atlas and in which also is planned the delivery of a new shipment of Bikes for Life.