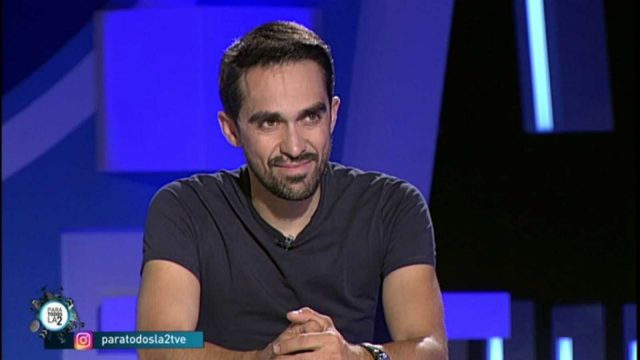 The project Bicis para la Vida by ŠKODA, by Alberto Contador, was one of the protagonists of the latest edition of the program ‘Para todos La 2’, broadcast as usual this season at noon every Saturday. In each edition, one of the blocks is dedicated to show the different activities and initiatives of NGOs and other institutions in the fields of solidarity, cooperation and development aid.

In the last program that attention fell on Bicis para la Vida by ŠKODA. The former rider from Pinto went to the Sant Cugat (Barcelona) studios to talk to the journalist Marta Càceres about the progress of one of the great projects in which the Foundation that bears his name and of which he is president works. During the interview, another of the Foundation’s main fields of action was also addressed: awareness and prevention of stroke.

Since 2016, ‘Para todos La 2’ has been a weekly half-hour programme broadcast on the second channel of the Ente Púbico, whose theme revolves around different social issues ranging from the inclusion of people with disabilities in the labour market to help for the most disadvantaged groups, as well as different and citizen participation initiatives aimed at implementing a better and more supportive society. A space, in short, which addresses the initiatives, work and efforts of institutions, groups and people to make this a better world.

On these lines you can see the interview of Marta Cáceres to Alberto Contador (in Spanish). The complete programme is available (also in spanish) on the Televisión Española website through this link.