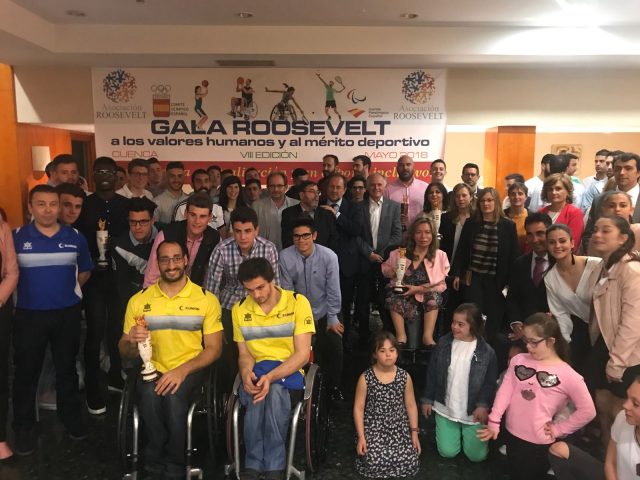 The Asociación Roosevelt rewards the work of the Fundación Alberto Contador

The Fundación Alberto Contador was one of the institutions and distinguished personalities this Wednesday in the framework of the eighth edition of the Roosevelt Gala on Human Values and Sports Merits, promoted by the association of the same name, in a crowded ceremony that took place at the Hotel NH Ciudad de Cuenca. In recognition of his work, the Roosevelt Association awarded the Foundation with the Human Values Award for its Social Work through Sport. The active collaboration of people with disabilities in the Bicis para la Vida (Bikes for Life) initiative, promoted with Fundación Ananta and Fundación Seur and with which the Pinto Foundation for the Disabled also cooperates, or the different projects promoted to raise funds for the fight against ictus, such as the cycle tourism race (which in 2016 was held in the city of Cuenca), are some of the awards that the jury highlighted for their choice.

Vicente del Bosque from Salamanca, former national soccer coach, was the illustrious person in charge of presenting the award to Francisco Javier Contador, who came to Cuenca on behalf of the Fundación Alberto Contador. “We are very excited and honored to receive awards like this one because of their significance. Here we have many examples of overcoming and sacrificing. Alberto and all of us who work at the foundation are very grateful to you,” he acknowledged during his speech.

The Asociación Roosevelt is an institution that since 1989 has been working towards greater equality of opportunity at all levels for the group of people with some kind of physical disability. A work that seeks its full and real normalization, and that translates into different fields of action ranging from the maintenance of a job exchange that stimulates the integration of labour to leisure and tourism projects accessible to all. “Life is much more than having a disability. An inclusive society is being able to be yourself,” reflects one of its slogans.